At the end of April of 2016 I traveled to Peru with five other veterans on a mission to explore plant medicines to heal service trauma.  This experience would be captured in the documentary Soldiers of the Vine.  Before making the pilgrimage to the spiritual home of ayahuasca, the universe had some more classes in store for me on the plant medicine curriculum.

In mid-April I participated in a three-day ayahuasca ceremony with a fellow veteran for his first time.  He had his war room breakthrough on his first step to process and integrate his war trauma.

I had my most challenging ayahuasca experience to that date in that ceremony when I drank to the veterans on my first cup of the second day.  Mother Ayahuasca kicked my butt as she gave me a powerful lesson in how old these plants are and how old the earth is and I’m this tiny little creature with my aspirations and motivations to share these medicines.  Who was I to think that these medicines could heal the deepest wounds?  Who knew if veterans could safely hold space for this level of work?  The most powerful and best purges to date got me ready to receive the medicine for even deeper work in the jungle.

I promise I was not trying to cram too many credits in my semester, but in between the three week period I was invited to Crossroads Ibogaine Treatment Center in Tijuana and Rosarito [now reincarnated as veterans treatment center called Mission Within] to participate as veteran test pilot number one and take ibogaine and toad bufotoxin (5-Meo-DMT) and have before and after brain scans (electrical and blood flow) as only the second person to ever do that with ibogaine.

I flew in to LAX and stayed with Dr. Joseph Barsuglia, former Director of Clinical Research and Assessment, who would be accompanying me throughout the entire experience.  In addition to working at Crossroads, he was participating along with me as a patient, as Dr. Joe was continuing to use multiple rounds of ibogaine to treat his lyme disease.

I had been on a strict regimen for weeks to prepare for the tests and going to Peru.  No consumption of medications (natural or otherwise), no supplements, no coffee, no kombucha, etc. were all necessary to have a clean baseline.  They even had me get my microbiome tested with the world’s first sequencing-based clinical microbiome test provided by uBiome.

There was a ton of prep work to describe my complete medical history including listing every single drug I had ever taken in my life.  As a self-identified psychonaut, I figured out that was easiest in chronological order.

I took all sorts of cognitive tests before and after in addition to the brain scans.

Here is the summary of my patient report.

Utilized meditation, yoga and plant medicines including ayahuasca dozens of times and over 50 healing journeys with psilocybin.

No prior psychiatric treatment.

Prior history of PTSD with nightmares, extreme rage, depression.

History of 4  major TBI’s with loss of consciousness 5-10 minutes, 8 concussions as soccer player.

The parietal lobes are involved in visual-spatial information processing, short-term memory, executive attention, receptive language on the left and empathy control and awareness of emotional expression in others on the right (e.g., prosody).

The precentral gyrus is involved in skilled motor movements, frontal eye fields and voluntary movement.  To the extent that there is deviation from normal electrical patterns in these structures, sub-optimal functioning is expected. 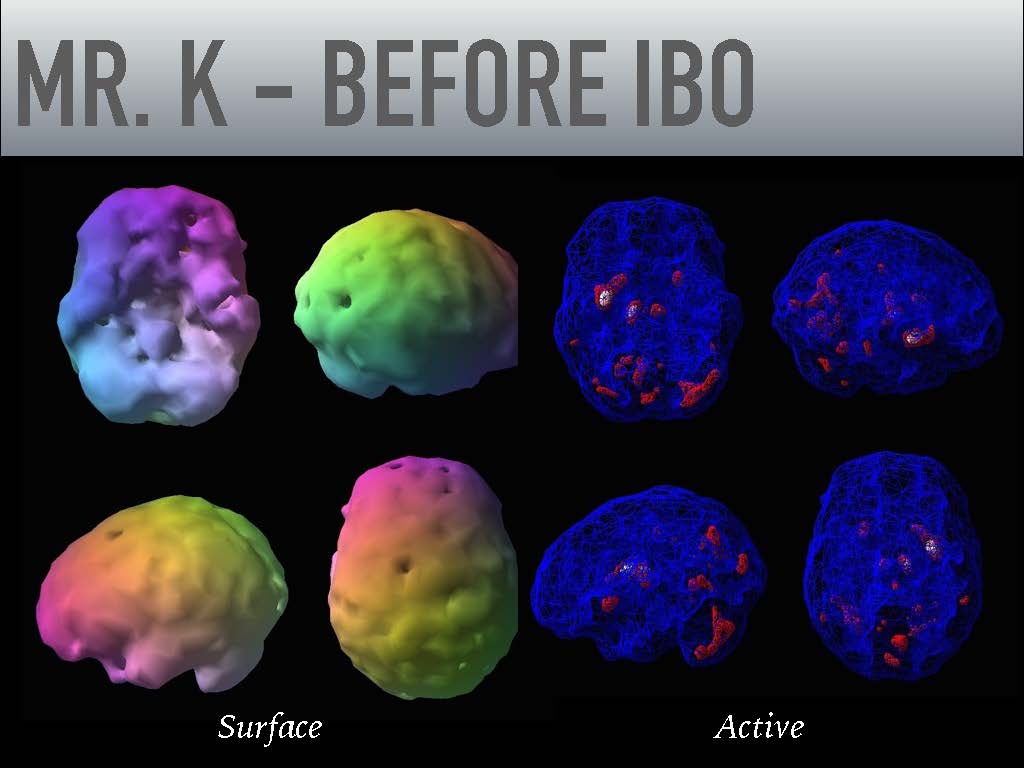 The best way I can describe the improvements for myself if that prior to treatment with ibogaine I was overclocking my chip on my left hemisphere.  It was running faster and able to process information more quickly, but more subject to faults, unreliability, and unexpected resets.

I have a family history of mania.  Ibogaine can treat trauma, addiction/compulsion and traumatic brain injury (TBI).  I got relief in all three categories.  I processed trauma from many near death experience flying helicopters and my sister’s death.   I uncoupled programming for some of my compulsive behaviors, especially eating for emotional comfort.  I healed my brain injuries from concussions from fights and soccer and got relief from other limitations in my brain health as well.

Ibogaine can help with the integration of the left and right hemispheres through the corpus callosum.  I definitely experienced that along with the so-called iboga dexterity, which I could really appreciate in my soccer playing.

The healing effects are still present almost two years later and I’m grateful for the gift of healing from the medicine and the chance to be an exemplar and advocate for these natural earth medicines which have helped me so much on my personal journey.

3 thoughts on “Ibogaine therapy with before and after brain scans”